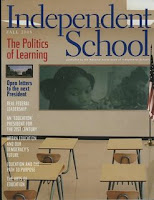 The other day I selected a book from my bookshelf because I wanted to remind myself of the last time I read from it to our Elementary and Middle School children. The book, The Grass is Always Greener Over the Septic Tank (1976), is a collection of funny, meaningful stories about families, raising children, and life’s challenges, told only the way Erma Bombeck could write. The story I read was “Ralph Corlis, The Coach Who Played to Lose” and is about a father, who after the death of his wife, moved to the suburbs to carve out a new life for his two sons and himself. The part that is most meaningful to me is when Ralph is confronted by two Little League coaches who are trying to understand why he coaches his team to lose games. Ralph replies, “It’s hard to explain, but kids go all through their lives learning how to win, but no one ever teaches them how to lose. Just think about it. Most kids don’t know how to handle defeat. They fall apart. It’s important to know how to lose because you do a lot of it when you grow up. You have to have perspective — how to know what is important to lose and what isn’t important.”

I find that my years of experience as a father, educator, and individual have taught me that it is, in fact, failure that motivates and forces us to get things right, and yet we work so hard to protect our children from it. What originally drew my attention to the Bombeck story emanated from a paragraph from my last letter to the parents at my school, which talked about the “f” word. The paragraph stated “One word that would most assuredly not appear on any list [that describes children] and is one of the most helpful character builders for children and adults is ‘failure.’ Unfortunately, we shy away from using that word with children and each other, and yet, it is a word we have to live with our whole lives. For some, failure serves as a roadblock, for others it is an obstacle to navigate around to a higher ground, and still for others, it provides the inspiration to get it right.”

Imagine how life would be without trial-and-error. Sir Ken Robinson, an internationally recognized leader in the development of creativity, innovation, and human resources, and professor of education, expressed this concept and belief best during his lecture at the 2006 Technology, Entertainment, Design (TED) conference when he said, “If you’re not prepared to be wrong, you’ll never come up with anything original.”

Robinson cites Dr. Maria Montessori in his lecture’s bibliography. Coincidentally, in Montessori Today, author Paula Polk Lillard states “It is psychological security, engendered in part by a properly structured environment, which gives children the impulse to try harder to face the unknown, including the unpleasant facts of life. The goal is to help children use their human energies to deal with the failures and disappointments of their lives and not be destroyed by them.”

This past fall, Dr. Howard Gardner spoke to the faculty and staff at my school about his theory on multiple intelligences. By placing emphasis on intelligences and abilities beyond the traditional understanding of intelligence, he broadens the scope of how we assess ourselves and our children. So, rather than focusing solely on linguistic and quantitative reasoning intelligences, he posits that human intelligence goes beyond the two and includes artistic, interpersonal, intrapersonal, and kinesthetic intelligences. Gardner helps to diffuse the definition of failure, and offers more avenues for children — and adults — to diversify their abilities and move beyond stringent definitions of success and failure. In his closing to those assembled, he displayed a quote from Ralph Waldo Emerson “Character is more important than intellect.”

In the 2008 winter issue of this magazine, the article “Brainology” highlighted the value of trial-and-error in child development. (You can navigate to www.nais.org to see the full article). Author, Carol Dwek, researched the differences in children who have a fixed mindset versus a growth mindset about intelligence. Children with a fixed mindset believe “that intelligence is fixed, that each person has a certain amount and that’s that” while children with a growth mindset “believe that intelligence is a potential that can be realized through learning. As a result, confronting challenges, profiting from mistakes, and persevering in the face of setbacks become ways of getting smarter.” Dweck’s article went on to say that “[children] understand that Einstein wasn’t Einstein until he put in years of focused hard work.”

How our children persevere challenges and overcome failure determine how successful they will become later on in life. I think Ralph Corlis had the right idea when he said, “It’s important to know how to lose because you do a lot of it when you grow up.”