If you know anything about professional development—in any field—you know that it is what sustains people and promotes excellence in their work and in the work place. When you work in education, professional development becomes a way of life, and living the life of a life long learner models for children and young adults the way to move forward in life.
Probably the easiest and often the cheapest form of professional development is reading. Books, internet, magazines, and newspapers provide a wealth of opportunities to learn on your own.
Like ASCD's Smart Briefs, The Marshall Memo is a way of letting someone else do the reading and condense the work, and you pick what interests you and serves you in accomplishing what you are working on at any particular moment. Check out The Marshall Memo and see what I mean.
Posted by Dane Peters at 9/28/2009 03:00:00 PM No comments: 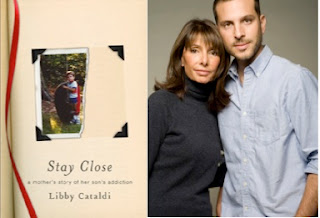 Drug addiction cripples young people—and their families—in ways that we can never understand. Stay Close, A Mother's Story of Her Son's Addiction is the latest heartfelt, sad story about the subject. The author, Libby Cataldi, was Head of an independent day school, The Calverton School, in Maryland for 17 years.
Many of you may remember the gripping book, Beautiful Boy, A Father's Journey Through His Son's Meth Addiction by David Sheff.
Cataldi will speak at The New York School of Medicine Author Night Series on November 2 starting at 5:30 p.m.
Posted by Dane Peters at 9/25/2009 06:45:00 AM No comments:

If you did not see this beautiful clip of a 3-year old's throw at the ole ball game, click on it below. It's priceless.

It was a beautiful day for a walk to Borough Hall where the annual Brooklyn Book Festival was taking place. Many vender stalls were erected throughout the grounds, all dedicated to books and reading. I grabbed an events schedule, and I was too late to hear Mo Willems (Don't Let Pigeons Drive the Bus, Elephants Cannot Dance, and Watch Me Throw the Ball) speak, but I was in time to hear a panel with Newbery Honor author Kate DiCamillo (The Tale of Despereaux, Because of Winn-Dixie, and The Magician's Elephant), Christopher Myers (Wings), and Michael Buckley (The Sisters Grimm) speak about "a world of whimsical imagination where elephants guide, boys fly, and humans and fairy-tale creatures live side by side."
Posted by Dane Peters at 9/19/2009 08:32:00 PM No comments:

The Fate of H1N1 May Be In Your Hands 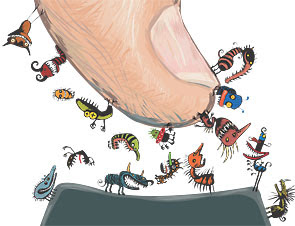 Please take four and half minutes and listen to the Take Away interview with NYTimes "Well" columnist Tara Parker Pope. You can also click to my July 30, 2008 post for more frightening facts about germs and their destructive manners.

In this last section, Levine focuses on what parents can do to help themselves in order to help their children, and again, she uses anecdotes from her work, research, and her own life, family and circumstance as a basis for her writing. She devotes the last chapter of this part of her book to mothers.

Here are some notable quotes from the entire section:
Levine wisely concludes the book by stating “Make certain that your children know every day how much they are loved, not for their grades, honors, or awards but for their striving to be independent, capable, good, and loving people.”
The green highlights throughout the four posts represent comments made in the book that are akin to the Montessori philosophy and the red highlights are not akin to the Montessori philosophy.

Part three opens with an introduction to University of California research psychologist Dr. Diana Baumrind who is noted for her work on the impact of parenting styles on child development. “Her central concern has always been to identify those parenting strategies that are most likely to turn out autonomous children, children who are independent, capable, and loving.”

See my October 22 post, “What is Your Parenting Style” for more information specific to Dr. Baumrind’s work.

Some notable points from Levine in Part 3:
Get to know Dr. Levine by viewing her interview about the book. 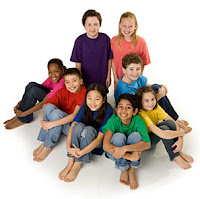 Levine states that the [child’s] self is born in the crucible of interaction between parent and child. Every time we encourage exploration, applaud independence, and require self-control we help our children grow into their best selves. She goes on to say that kids with a strong sense of self can come out of dismal economic circumstances and kids with an impaired sense of self can come out of the most fortunate economic circumstance.

Here are several other points Levine stresses in this part of the book:
Levine looks at child cognitive and social development, parenting challenges, and proposes parenting strategies that are most likely to facilitate development at different ages, beginning with ages 2 to 4 and working through ages 5 to 7, 8 to 11, 12 to 14, and 15 to 17.

This summer our faculty and staff read The Price of Privilege by Madeline Levine with the hopes of extending our understanding of diversity—socioeconomic diversity—and how it affects our students, their families, us, and our surrounding communities.

I would like to share what I gleaned from my reading with you in several posts. There are four parts to the book, so this and the next three posts will encapsulate my thoughts and impressions.

Levine takes the reader into her therapy sessions with young people. One statistic after another give insight into this world of children and families of privilege. Some disturbing and others interesting, here are a few from part one:

Always looking at the student’s construction of “sense of self” as a measuring stick, Levine describes the privileged student as indulged, coddled, pressured, and micromanaged, and paints the at-risk child environment as empty refrigerator, unforgiving circumstances, metal detectors in their schools, killings in their neighborhoods. If you want a closer look into the world of at-risk children, read "In Prisoners' Wake, A Tide of Troubled Kids" from the July 5, Sunday Times.

Probably the two most salient points/suggestions I take away from this section of the book is 1) “Perhaps the single most important ritual a family can observe is having dinner together.” And 2) [Children] need to see that their parents value effort, curiosity, and intellectual courage.” On the latter point, read Carol Dweck’s work in my July 10, 2008 post.

Please feel free to comment on what you read, especially if you have read the book.

Records Exist to be Broken

While reading the August 10, 2009 “Sports Illustrated” magazine’s “Faces in the Crowd” section I noted

Leland McPhie of San Diego Track and Field broke the American men's shot put record at the USA Masters outdoor championships. His throw of 22' 6½" beat the previous mark by nearly a foot. I scratched my head as I know that the men’s shot put record is around 75’. When I read the piece again, I noticed that McPhie is 95-years old and was competing in the 95- to 99-year old division!

Congratulations to Leland McPhie! What an inspiration to our younger aspirants.