The 33 Traits Of Inspirational Leaders 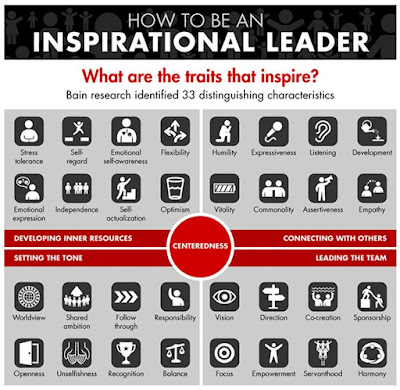 "But what makes an inspirational leader? This infographic identifies 33 distinct and tangible attributes that are statistically signiﬁcant in inspiring others." Read more at "The 33 Traits of Inspirational Leaders."

Who is Ethan Bortnick? Here is an excerpt from his website bio:


“Recognized by the Guinness World Records as 'The World’s Youngest Solo Musician to Head-line His Own Concert Tour,' 16-year-old Ethan Bortnick has been performing around the world, raising over $50,000,000 for charities across the globe.


When he was just three years old, the Hollywood, Florida native asked his parents for piano lessons and discovered an uncanny ability to hear a song once and play it back note for note – the musical equivalent of a photographic memory. He soaked up the music of such diverse artists and composers as Beethoven, Mozart, jazz pianist Bill Evans, Little Richard, Billy Joel and Elton John, and began creating original compositions at age five. A few years later, Ethan began making television appearances and touring, connecting with audiences in countries such as Japan, Brazil, Canada, South Africa and Australia.”

Get to know him better by watching this YouTube video.