It's Just a Story

As he made his way around the corner, Paul reached into his pocket for spare change to drop into the paper cup of the beckoning street person.  Where the money went, Paul did not care; he was happy to help someone less fortunate.

Paul was a contributing artist at an odd but well respected gallery in the City.  People often viewed his video/CD-based installations with wonderment and invariably walked away feeling inspired, hopeful, and reaffirmed.  A former teacher of 16 years, Paul developed a sense of what made up a good child.  Over those years he came to appreciate the characteristics in a child that caused him to stay in the classroom as long as he did.  Kind, hard working, thoughtful of the needs of others, and honest described the child he envisioned as the perfect child.  Paul felt obliged to help parents see this in their children.

When his wife passed away and he had to raise his own two children by himself, he struggled to find ways to make ends meet financially and at the same time hold his own son and daughter to the values about children in which he believed so passionately.  Medical insurance held him to teaching, but financial necessity forced him to explore other avenues.  Technology, art, and part-time working opportunities lead him to work evenings at a small art gallery.  The hours were flexible, the owner loved his children, and a creative side of Paul emerged quite unexpectedly.  Here is where he began to develop his love of art and incorporate his appreciation of good child qualities and a desire to help parents see how beautiful children can be if nurtured and taught with love, care, and structure.

During ensuing years, his art, which was presented in sound, video, and still images, depicted children extending themselves in ways that captured the viewer – ways that told the story of just how beautiful children are.  Paul’s exhibits were especially appreciated by parents who were in the throes of a particularly difficult time with their children.  Repeatedly, Paul’s patrons were captured by the beauty children exhibit in their innocence juxtaposed to their desire to imitate their parents.  The power held by parents over children was readily seen in an image of a child’s eyes looking for approval, or a questioning voice looking for an answer, or a joyful smile offering love.

It was no surprise when one evening as he was exiting the gallery, Paul noticed a young girl holding the hand of a lost soul who was sitting on a shiny brass standpipe.  How proud Paul beamed to eventually see that it was his daughter who was giving comfort to the stranger. 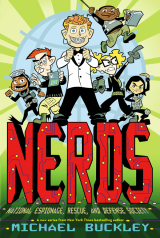 I had the good fortune to listen to the very funny author Michael Buckley at our school's Holiday Book Fair.  Michael talked about his career that began as an intern on the David Letterman Show and progressed to being an acclaimed author of the Sisters Grimm series.  His newest series, NERDS (National Espionage, Rescue, and Defense Society) is about the misfits at Nathan Hale Elementary School in the "geektropolis" of Arlington, Virginia.  Much like James Howe's The Misfits and 13 (see Oct. 22 and July 29 posts), Buckley's writing is of a Simpson's genre suitable for kids and adult reading.


When Michael read from the first chapter of the first book in NERDS, fifth grader Jackson Jones is in the dentist chair staring up at Dr. Gupta.  What follows is hilarious.
Posted by Dane Peters at 12/28/2009 07:55:00 AM 1 comment:

The holiday season — no matter what faith — does bring families together, and as I read Wendy Mogel's (The Blessing of a Skinned Knee) recent, insightful article "Smart Empathy" in the winter issue of Independent School magazine, it made me appreciate how important a role empathy plays in binding families, especially today in our school communities.  In her article, Mogel cites Daniel Pink's A Whole New Mind (see post dated 3/30/08 post) by pointing out his emphasis on empathy as an essential quality for success in the 21st century.  On the other hand, she does warn readers that there can be a "dark side of empathy," and while the economy is placing stress on our families, it is also setting a stage for school communities to take notice of others' needs.

If you want a touch of seeing inside empathy, a teacher colleague sent me a link to John Henry Faulk's Christmas story, which first aired in 1974 on radio's "Voices in the Wind" and is now presented annually on NPR radio.  It is a beautiful story about one family being thoughtful of another family.
Posted by Dane Peters at 12/24/2009 01:43:00 PM 1 comment:

One of the greatest and least expensive gifts you can pass on to a child—or for that matter, any person—is a smile. Here are a few neatly written words that explain what I mean:

Smile to talk to babies. The smile they return will pay tenfold.
Smile to a child to encourage without words.
Smile to an adolescent to give confidence and your approval.

Smile to a colleague to lend support. 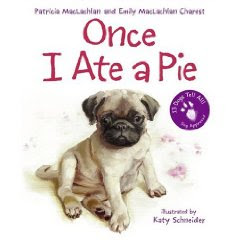 I can remember when my wife and I traveled with our two sons many years ago to Woolwich Arsenal, England outside of London.  We did a house exchange with a family and lived in their house right in the town.  We found ourselves walking everywhere.  To amuse ourselves, whenever we passed a dog, one of us would give the dog a name based on the look of the dog, the owner, and our general state of mind at the time.


Well, you can imagine my surprise when 23 years later I was listening to our librarian read to a group of children the book Once I Ate a Pie by Patricia MacLachlan.
Posted by Dane Peters at 12/16/2009 07:23:00 AM No comments:

You may have gathered how much I love the innocence of kids. Helping them discover the truth without discouragement is part of the challenge and joy in teaching.

The other day a Lower Elementary (grades one, two, and three) teacher bounded into my office and asked, "Do you have a minute for a precious story?" Without hesitation, I said, "Absolutely."

"Two boys, second and third graders, were explaining to the class their project on tsunamis. As you might imagine, they enthusiastically conveyed their discovery and interest in the topic to the class. Both boys were going on and on about how big the waves are and how much they can destroy towns and kill a lot of people. So much so, I could see that the class was staring wide-eyed terrified with 'incredible' written all over their faces. Before I could jump in with some perspective, first grader, Mazie, piped up with 'Salamis can't really hurt you. Heck, we live in New York City. We can get to the Empire State Building and escape the salami.' I could see the relief on the faces of the class now that they knew they could escape the salami . . . I mean tsunami."

A Slice of America

This post was originally published on October 10, 2008. Because I saw Anna Deavere Smith perform her one woman show "Let Me Down Easy" recently, I wanted to sing her praises once again. She is truly an amazing actress. The NYTimes Health section did a piece "Through 1 Woman, 20 Views of Life's End". Do click on the TED link below to see her perform.

If you have never heard or watched Anna Deavere Smith, it is time to become acquainted with this very talented woman. In this 23 minute video, she portrays Studs Terkel, a woman convict, a Korean shopkeeper, and a bull rider, each character more gripping than the other. The fact that this particular performance was given at a TED (Technology, Entertainment, Design) Talk should give you an indication of its quality.

I first saw Smith at an NAIS Annual Conference and subsequently in "The West Wing" series. See a vivid slice of America by watching the TED video.

Email ThisBlogThis!Share to TwitterShare to FacebookShare to Pinterest
Labels: Diversity 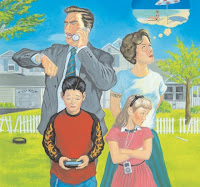 When I started reading Patrick Lencioni's latest book, The Three Big Questions for a Frantic Family, I did not know that, coincidentally, the same week, I would be encouraged to read Time magazine's November 30 cover story, "Can These Parents Be Saved?"


While the book sets forth advice on how and why we (and I include myself) find families in a frantic pace, the article reveals some of the resulting frantic fallout, including "helicopter" parents and "stealth fighter" parents.  Both pieces give excellent perspective and good advice.  Start by clicking on the article that cites "a 25% drop in free playtime for 6- to 8-year olds from 1981 to '97, while homework more than doubled"; then, pick up a copy of the book that is an easy read and gives sound advice on managing a healthy family.
Posted by Dane Peters at 12/05/2009 09:06:00 AM No comments:

It's Not My Fault!

Each morning as I stand by the school door greeting kids and parents, I often relish in the open, honest dialogue that goes on between siblings, especially with parents overlooking in the background.

The other morning, brothers — one four-years old and the other six-years old — came screaming down the sidewalk on their scooters, stopping inches from my feet. With their innocent eyes looking up from under their helmets at me quizzically and without words spoken, I knew they knew that they were late. Smiling, I held my wrist up chest high with my other hand pinching my watch and said, "Four minutes late." Before I could complete the sentence, "What's the deal?" the older brother pointed his finger at his brother who was standing alongside him and said, "It's his fault." "Oh?" I asked, which was immediately followed by his statement, "He had a tantrum." Whereby both boys proceeded to make their way through the doors. Mom looked at me, rolled her eyes, and gave me a wry smile.