A Force for Good 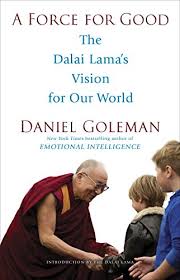 In my quest to find out more about emotional intelligence, I discovered emotional quotient expert, Daniel Goleman's book A Force For Good: The Dalai Lama's Vision for Our World. Goleman brings out the Dalai Lama's determination to raise the care of humanity and having a purpose in life of reaching out and helping others.

Here are two quotes that reflect a snapshot of the book's connection to emotional intelligence:

“Compassion reduces our fear, boosts our confidence, and opens us to inner strengths,” the Dalai Lama adds. “By reducing distrust, it opens us to others and brings us a sense of connection with them and a sense of purpose and meaning in life.” [pages 55-56]

“And when high- and low-ranking people in the same organization interact, the person of higher status not only shows less attention as indicated by gazing less at the other person but also interrupts more and monopolizes the conversation.” [p. 93]

“STEM skills are vital to the world we live in today, but technology alone, as Steve Jobs famously insisted, is not enough. We desperately need the expertise of those who are educated to the human, cultural, and social as well as the computational.”
Posted by Dane Peters at 4/05/2018 06:05:00 PM 8 comments: