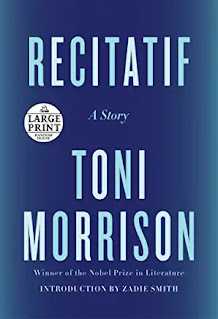 Toni Morrison's one and only short story that was published in  An Anthology of African-American Women CONFIRMATION by Amiri Baraka (LeRoi Jones) & Amina Baraka (1983) is now a book on its own entitled Recitatif.  It is an intriguing story about two eight-year-old girls who spent four months together at St. Bonaventure shelter. There, Twyla and Roberta—one who is African American and the other white and from different backgrounds—get to know one another. What Morrison does so cleverly in her story is that she never lets the reader know which child is black and which girl is white.
What enhances the book is the introduction by Zadie Smith.
Posted by Dane Peters at 2/25/2022 09:11:00 AM

Nice Blog.. Thanks for sharing..Jobs for seniors

Amazing Blog!!! Keep writing blogs like this for our information, looking forward to read more blogs.

Nice Blog.. Thanks for sharing....Leasing software

Check out the best Best B.Com Colleges in Greater Noida


I got so much knowledge from this blog and looking to read more blog like this,...

Get the Complete Details about
D.Pharm syllabus Details

Get the Complete Details about
B.TECH ADMISSIONS Details