Neurodiversity: A most Important Word & Topic

From NeuroTribes by Steve Silberman:

"One of the most promising developments since the publication of 'The Geek Syndrome' has been the emergence of the concept of Neurodiversity: the notion that conditions like autism, dyslexia, and attention-deficit/hyperactivity disorder (ADHD) should be regarded as naturally occurring cognitive variations with distinctive strengths that have contributed to the evolution of technology and culture rather than mere checklists of deficits and dysfunctions."

A Video Against the Misuse of Standardized Testing

Check out this video that is a message to schools and children on how to respond to the misuse of standardized testing.

The video is presented by the Community Montessori School in New Albany, IN. View their special Be Brave for Education website.


"Our care of the children should not be governed by the desire to 'make them learn things,' but by the endeavor always to keep burning within them the light which is called intelligence." (Mari Montessori)

A Lesson in Emotional Intelligence 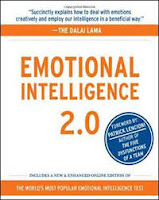 Embedded in his article, Bradberry uses this YouTube video of Mr. Rogers speaking at a Senate Commerce Committee hearing in 1969 about caring for children.